These particularly accomplished and innovative new electronics feature stunning technical specifications. Rather than figures with very relative meaning, it is through listening that we have discovered animals as ferocious as they are subtle.

The electronic tubes really different, radical but musically haunting are quite rare to find. Those of the Austrian Ayon are undoubtedly of this race, and it is neither the Polaris III preamplifier nor the Orthos XS mono blocks that will make us think otherwise. On the contrary ! Proprietary technologies including the AC Regenerator circuit powering the power of the preamp or the bestial five-fold push-pull of KT150, the new weapon of battle of the manufacturer, are indeed at the origin of the remarkable musicality of these imposing machines. 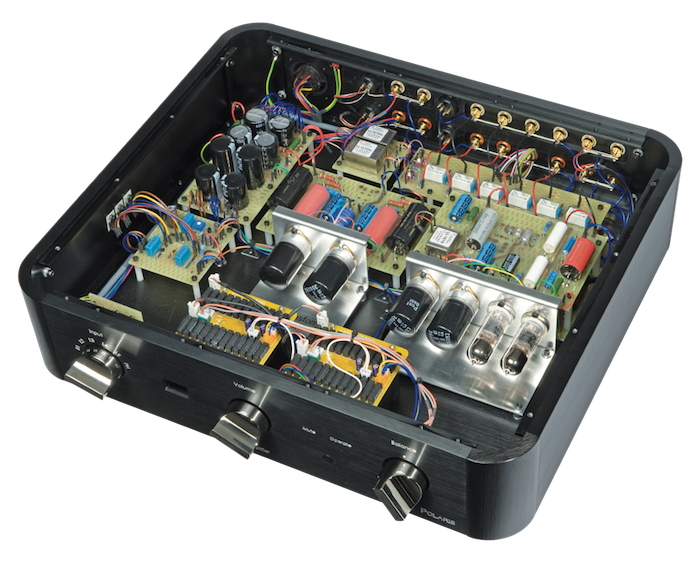 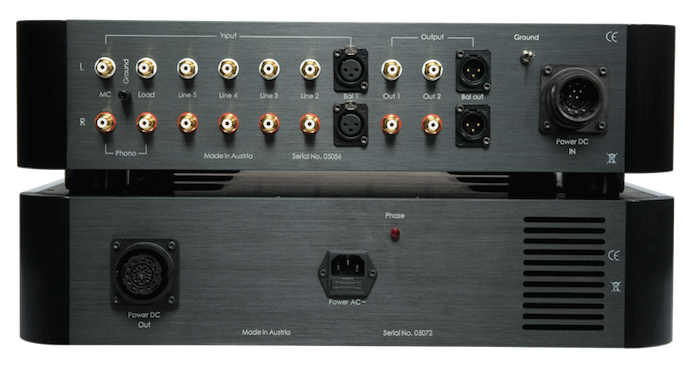 This preamplifier is in the middle of a range of five references. Like the Spheris models, it benefits from a separate power supply and is therefore installed in two independent boxes. Made by an assembly of very thick aluminum plates available either in black anodized finish or chrome as all the chassis of the Austrian manufacturer, they rest on aluminum feet that absorb the resonances.Their hood has six stainless steel grilles windows that facilitate the evacuation of the heat released by the tubes. The line-type preamp stages are supplemented with a phono RIAA section for the MC cell as delivered on the tested Polaris III, but the preamplifier is available on demand without this input. They are installed in the housing which has three knobs on the front (selection of sources by relay, volume and balance) plus a volume display with LED segment LEDs and two LEDs indicating mute and commissioning by the LED. switch under the power chassis. The rear connector includes a pair of RCA for receiving impedance matching inserts depending on the cell used. A toggle switch will connect or not the electrical ground to 0 V electronic. The second box embeds all the components and power circuits and is connected to the preamplifier chassis by an umbilicus with multi-pin connectors. A remote control duplicates the current functions. The topology of the pre-amplification scheme is very simple with a single gain stage without any negative feedback and a single link capacitor at the output of this stage. The TVC (Transformer Volume Control) volume control acts directly on the output with -42 dB attenuation in 1 dB steps. It is performed on each channel by an attenuator transformer whose multiple outputs are switched by relays, and allows a balance adjustment to ± 0.05 dB. The TVC’s top gain stage is entrusted to a tube known for its sound quality and for its reliability (lifetime greater than 10,000 hours), it is a NOS pentode Siemens C3m wired in pseudo-triode . The phono stage is divided into two cards. On each of them, a Lundhal impedance matching transformer sends the amplified signal to a two-tube circuit (C3m and 6H30) and passive RIAA equalization (styroflex capacitors and film precision resistors). All tubes are mounted on copper / beryllium contacts specially made for Ayon. The balanced output is made by a Lundhal transformer. An additional RC type filter section for the HV power supply and three filament voltage regulators refine the voltages from the power supply chassis. As for the power supply, it uses the active technology AC Regenerator (not installed on the previous version Polaris II) which consists of generating a sinusoidal voltage to the healthy envelope, on the one hand, and isolating it effectively. sector to limit any intrusion of electrical pollution, on the other hand. A first toroidal transformer connected to the mains sends its secondary voltage to Regenerator circuits installed on a printed circuit board under which there are several power transistors. After fitness and cleaning treatments, the signal coming out of this card is sent to a second toroidal transformer whose secondary HV attacks a four-valve NOS Adzam CV135 rectifier. HT filtering is assigned to an LC type cell. 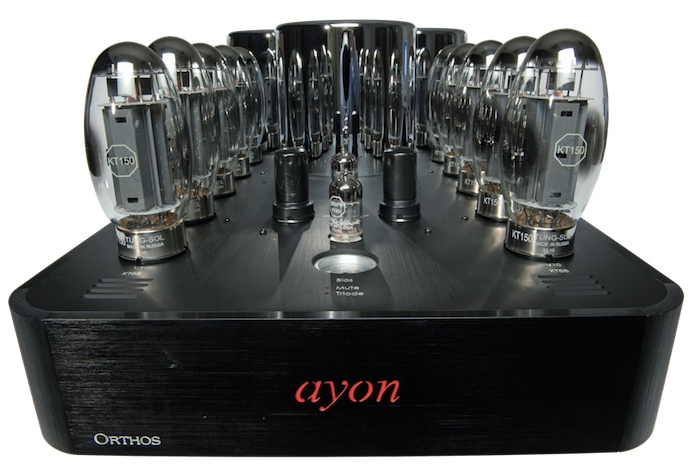 The XS is the third version of Orthos blocks originally designed with KT88 by Gerhard Hirt, head thinker at Ayon. It takes up the traditional layout of the tube power amplifier with a chassis that is deeper than wide and high in thick aluminum plates resting on aluminum feet. The front is engraved with the Ayon logo with red backlight (flashing during preheating and then fixed). The half-quintal of the block is explained by the amount of heavy components that equip it. In addition to the fourteen tubes including ten pentodes KT150, two pentodes 6SJ7 and two double triodes of the series 12Axx, it is essentially the three huge transformers in chrome drums filled with absorbent material (power supply and output) which weight the device. It is easy to imagine the size of their magnetic circuit knowing that the device delivers in Class A trifling 300 W effective 8 ohms in pentode mode or 150 W in triode mode, switchable by a button on the chassis. The back panel includes three HP Ayon plugs, RCA and XLR input and a 0 or -6 dB gain switch. There is also a rotary selector and access to a potentiometer that will optionally adjust the semi-automatic polarization of each of the ten output tubes with the help of small galvanometer placed in front of the tubes. The power supply incorporates two transformers, separate rectifying and filtering sections for each stage, including dual LC filtering for KT150 HT and electrochemical high energy storage capacitors. The filaments have separate control circuits. Note that the power up is sequential and takes about one minute. As for the symmetrical circuit, it has been redesigned but designed as simple and direct as possible. The input stage consists of a double triode 12AX7 for the gain and a double triode 12AU7 for the impedance matching before the two pentodes 6SJ7 in drivers of the two arms of five KT150 of the push-pull output . No negative feedback is applied along the pattern.

Construction: The aesthetics of the Polaris III and Orthos XS electronics in black anodized version displays a certain elegance.Despite their imposing size, the blocks and their army of tubes and transformers have a very acceptable visual. The internal implementation work is done with great professionalism.

Components: Many very interesting and highly relevant technological choices are installed in these two electronics. NOS tubes (for New Old Stock) placed at specific locations on the circuits were deliberately selected for their superior sound and high reliability. Is not this proof of a successful design?

Serious: We have never had the opportunity to review such powerful tube blocks. Associated with the Polaris III preamp with very low output impedance, it is important, the Ayon set develops a particularly punchy message but always rich in information. Whatever the pentode or triode mode used, the bass is probably the most articulate we’ve got with tube electronics so far. The extreme low back (introduction to the organ, Cantate Domino) never spoils the permanent pleasure of listening.

Medium: The paralleling of tubes and the multiple push-pull assembly have never been the most accurate configurations in timbres.However the results obtained with the Ayon blocks are really bluffing in terms of tonal richness and harmonic palette. The wedding with the single-stage preamplifier and volume attenuators transformers is sumptuous. Our preference goes to the triode mode to the more organic restitution (confusing presence of soprano Marianne Mellnäs, Cantate Domino) and more fluid.

Acute: No aggressiveness disturbs the message proposed by the Ayon at the top of the audible band. The sibilants of voice (Patricia Barber, CD Gotcha) or the drums brass (“My Treasure” by Sinne Eeg) remain distinct and chiseled without the least trace of heat (triode) or artificial brilliance (pentode). On complex orchestral messages, fortissimo passages generate no stridence, a phenomenon often encountered on less powerful and less qualitative tube material that intermodulates as soon as the musical signal becomes demanding.

Dynamics: The current capabilities of the Ayon blocks are absolutely formidable and we had fun pushing the blocks into their entrenchments, not the last ones because we threw in the towel long before. In both modes, it pushes very strongly in all relaxation without reaching any audible limit on the transients (explosive impacts of the rods on the snare, “Animal” by Francis Cabrel). Idem on micromodulations (bells, “Moonlight on Spring River” by Zhao Cong) restored with a remarkable harmonic development.

Attack of note: Not only it grows but it accelerates too! On the largo of Bach’s Concerto No. 1, the impact of the hammers on the piano strings sounds extremely clear. This frankness of attacks allows the instrument to find a true identity in addition to a stable and very focused place in the space to the left of the Kammerorchester Staatskapelle Berlin. Rare for a push-pull assembly with as many tubes.

Soundscape: The Ayon ensemble has proved very accurate and very credible in the spatial presentation. The generosity of the transients documents the harmonic declination, the tonal richness of each note, of each sound emitted. Listening becomes more authentic, more natural, more holographic. The atmosphere of each recording emerges with great realism and the listener virtually enters the scene of the performance. The presence of soprano Marianne Mellnäs in the chapel (Cantate Domino) is magnificent, you can see the interpreter in front of you and the multiple reverberations generated by the building give an instant idea of ​​its volume and dimensions.

Transparency: The Polaris III preamplifier has given us a very neutral, very carnal, very dense restitution. The association with Orthos XS blocks produces a double effect. The search for speed and instantaneous power will better accommodate the pentode mode, while the triode mode goes a step further in tonal refinement and spatialization. In both cases, the fundamentally musical, emotional restitution is not unlike that of a single-ended montage. 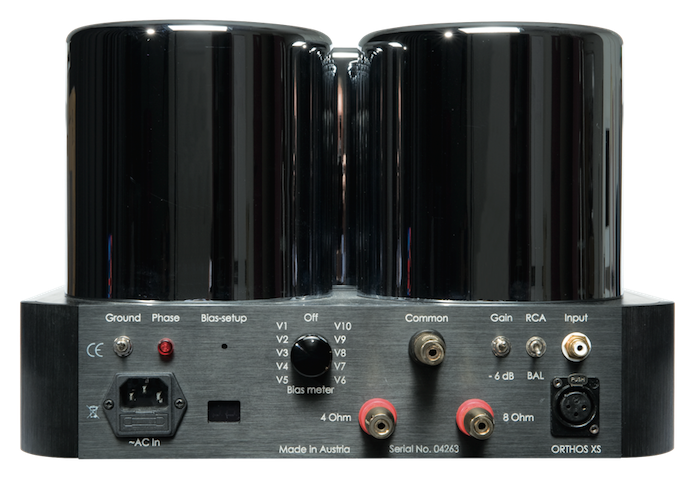 This Austrian set with Ayon tubes goes off the beaten track. The Polaris III preamplifier adopts a pure and simple audio scheme framed by an extremely sophisticated power supply. In audio, power still plays a major role in the sound results of electronics, and we understand why the Polaris III sounds so good. The Orthos XS blocks show and demonstrate that the tubes are always capable of the best. With a phenomenal power output and a high fashion rendering that also knows how to do in lace, they rise without problems at the top of the current hierarchy of tube amplification. And what we have heard is enough to say that these electronics have serious sound assets to seduce the most convinced “transistorists”. Listening to these Ayon is necessary and recommended for all those who plan to invest in separate elements of very high-end all technologies.