The dead say live longer! This spell originally referred to a small dairy in Austria, but can certainly also apply to our new test object, the Ayon CD-T II. Also from Austria, by the way. 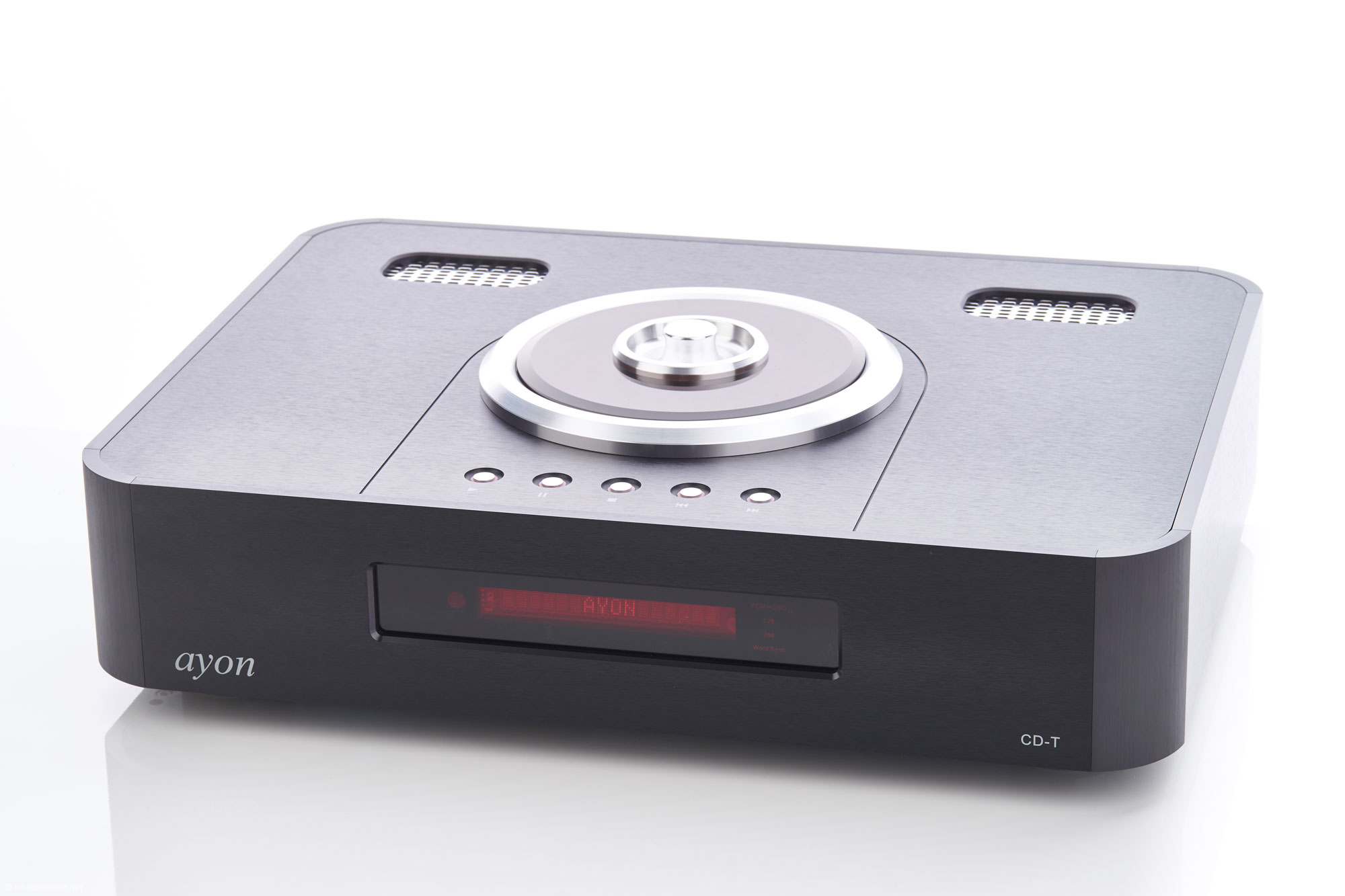 But no new UFO from the “space patrol”, as one might suspect in the first picture above. The CD-T II comes in the classic Ayon dress. With the five buttons on the surface, the most common functions can be operated, the remainder is done by the remote control.

Evil tongues from the streaming faction will, of course, immediately reinterpret the sentence in “weeds do not pass”. Shall they. Ayon started with the model CD-T, which was already available to us in 2012. At that time many a man had already rubbed his eyes in amazement. Anachronism! But that’s not all, six years later, the model CD-T II is now showing a further development. Or to quote Gerd Hirt, except for the Philips Pro drive, a complete retreading. At first glance, the model CD-T II looks just like its predecessor, and the second one, by the way. At least from the beginning. Classic Ayon design, square, practically good. Nonsense, what am I talking about, it was about something completely different. Anyway, I think that a proven design does not have to be changed every year,

Fortunately, the quality of workmanship has not changed either. The elegant case with the black anodized aluminum plates still makes a bomb-proof impression. The most important functions can be directly selected on the top of the device via illuminated push buttons, all other functions are then handled by the remote control. Also in tank quality, by the way. The buttons on the device are quite useful, if calculated on Sunday, the batteries are empty or the Omi again trying to call with the remote control.

For connection to the DAC, the CD-T II offers all imaginable possibilities: S / PDIF – also with BNC socket! – and AES / EBU at the tube output, the transistor output additionally contains a Toslink connection. There is also an I2S connection. The tube is of course only active in operation with S / PDIF or AES / EBU, more on that later. For I2S connections, there is unfortunately no international standard, so that in the contact assignment each manufacturer cooks his own soup. However, Ayon has consistently indicated in the manual the pin-out. The hobbyists among us could therefore assemble a RJ45 plug yourself. Have lots of fun with it! 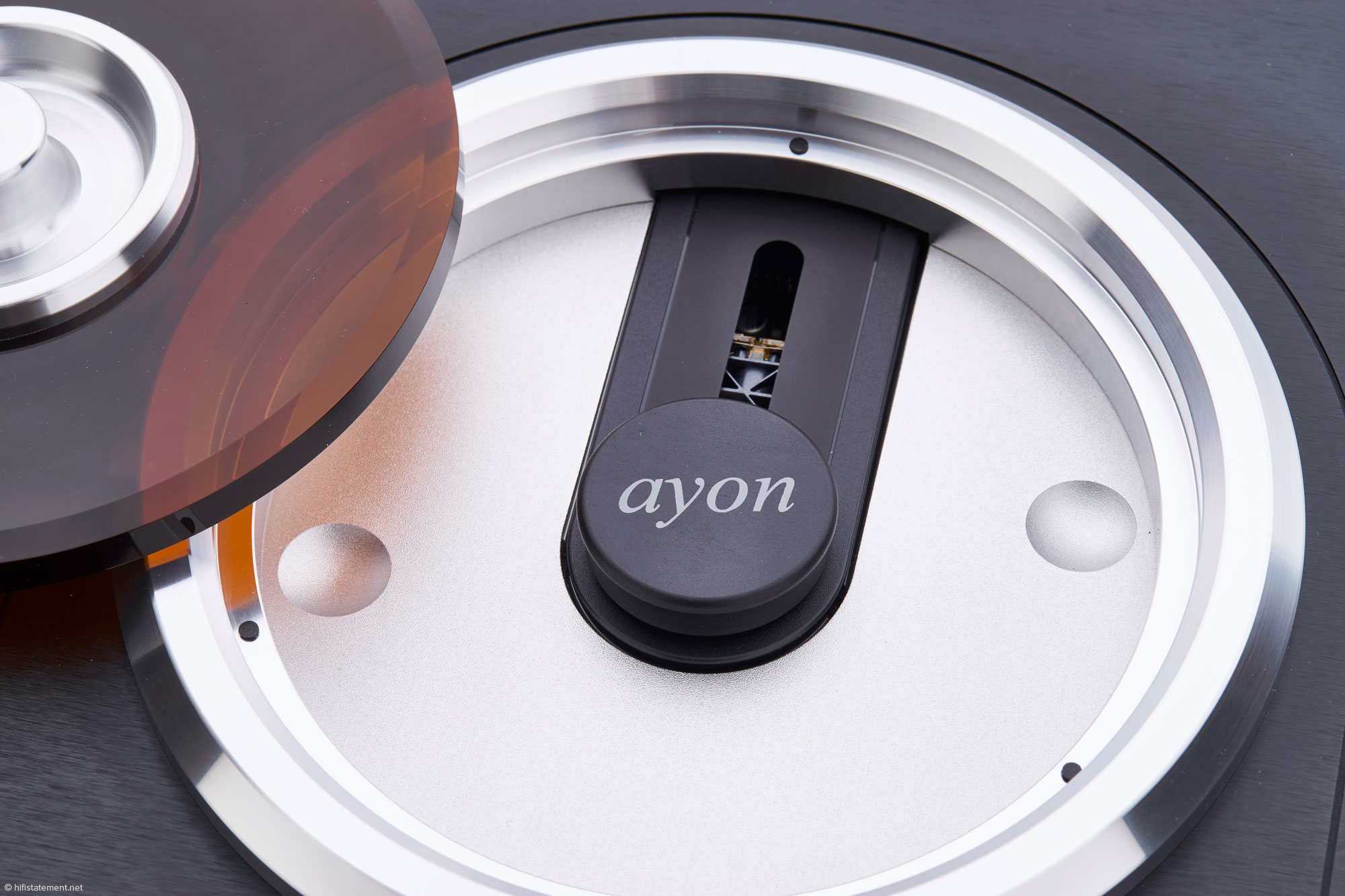 The magnetic puck is no longer integrated in the cover plate of the new model, but must be placed separately.

After switching on the device, the display shows a warm-up time, an absolutely sensible device, not only with regard to the buffer tube. Ayon newcomers may need to consult the manual when looking for the power switch, so well hidden is this one. A change compared to the predecessor model can be seen when you insert a CD, the cover of the CD compartment is now divided into two parts. First, the CD is fixed with a small Magnetpuck, then closed the compartment with the acrylic cover. In the predecessor model, the puck was integrated in the cover. Ayon hopes this design will provide better feedback. I had now compared the old version with the new and heard no significant difference. At least not,

Like its predecessor, the CD-T II contains the legendary Philips CD PRO2 drive, which has not been produced for a long time. I thought. But as Gerd Hirt told me, Philips had already outsourced the production to a small manufacturer, who still produces this drive in small quantities today. For capacity reasons probably only for a manageable number of customers.

Just a reminder: this is what a decent CD drive looks like. Unfortunately, there are very few manufacturers who offer a high-quality drive in their devices. And for these then exorbitant prices are required.

The CD-T II also has a tube in the digital output inside the device. What did she lose here? The consideration is as follows: Many disturbances of the digital signal occur on the way from the S / PDIF output chip to the DAC because the generator is too weak for this. Ayon has therefore installed a buffer in the form of a cathode follower here. The chip must then only drive the grid of the tube, which he can easily. The tube does not amplify the signal, but works only as an impedance converter. The big question is, which tube is suitable for this rather unusual position? An audio tube falls flat because of the low bandwidth. It was found in a tube from Russian military stocks, which was used in the radar field.

For all transistor junkies among us, for whom a tube is something like the holy water for the devil, Ayon also has a solution ready. The device can be switched between transistor or tube operation. For this there is a small switch on the back, in addition the connection cable must be transferred to another output. Of course, the transistorized digital output is also slightly buffered to minimize cable interference.

The former possibility of extrapolating the sampling rate to 24 bits / 192 kilohertz does not exist in the new version. After today’s usual D / A converters have built this upsampling function in-house, Ayon has dispensed with this device. For this purpose, the company offers as an additional option a module with which the PCM data is extrapolated to DSD128. This facilitates the household budget in addition to 995 euros. About such functions, there are endless discussions, because ultimately the information content of the original can not be greater. On the other hand, one expects advantages in the design of the filters, which have to be much steeper in the case of pure 1-bit / 44 kilohertz sampling, or which would have to intervene much earlier if the layout is flatter. Filters with high edge steepness are not without problems for various reasons. The test device is already equipped with the additional PCM-DSD module, more on that later.

Let’s just listen to what the drive has to offer in normal, unedited CD playback. Once the device is completely new, I let it run overnight before seriously listening to music. Of course, the electronics are still not fully integrated with that; Ayon even recommends a 30-50 hour playtime. As with any mechanical device, a stable surface is the prerequisite for optimal reproduction. For me, the device is on the bases of Kaiser, which again causes a significant improvement over the standard feet. But that is probably the case with every device.

First let’s have a word with Louis Armstrong. Miles Davis once said about him that his music would be great if it was not for the stupid grin. From the mouth of Miles certainly a high compliment. The recordings with Armstrong are all historical, to describe the sound quality once. Euphemisms are indeed in our politicians currently totally in. Nevertheless succeed with the CD-T II an incredibly vivid representation of the musicians, you can almost see how Armstrong stands with his white handkerchief on the stage and sweats. Also, the quality of the playback is totally in the background while listening, you just listen to what the guys in the band came up with at the time.

One of the strengths is the enormous joy of playing, which obviously does not come exclusively from the rest of the system. Now, the Armstrong recordings do not ignite a dynamic brilliant fireworks display, but the drive and groove of the music comes across very authentically. The playback is very clear with high resolution, a typical trademark of all devices of the company Ayon, which I previously had for testing available.